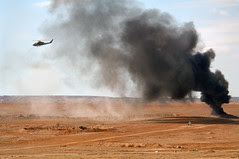 war zone
Originally uploaded by what has become of you?
In the middle of an attack, I realized that we were living in the midst of a war zone. Too late I recognized that the fire in the building was in fact a gas attack. We always thought the next attack would be a dirty nuclear bomb.

The concentration of smoke and gas was a problem we had not considered. Once again all of our work continuity and disaster recovery (DR) plans seemed ridiculous. In this situation having large groups of people moving to a dedicated area in and around the target area was a recipe for death.

Too late (?) I realized that everyone's DR plans would get lots of people killed. I recalled the puzzled expression on the soldiers face when confronted with the methods used in the attack. He could only say "you're living in the middle of a war zone..."

People were fleeing now, running full tilt in an effort to get away. Some however were waiting near the buildings in designated congregation areas. In this case a deadly mistake. I saw my wife and yelled at her to come along.

The ingestion of chemicals in that fateful yell is what did me in. I ran for it anyways. I could see her running in my direction as I fell. Someone was hovering over me as I found myself drifting into a peaceful sleep.

The next thing I knew was that I had awaken from that world into this world. I thought I must be in Iraq. Then I realized that no, I was in New York. In the middle of a war zone.

Next I realized that I would need to revise all of my DR plans. The only network that could possibly survive the traffic from an attack would be the world wide web. I had better make our DR site a virtual one so that people could follow the rule "get to safety, then communicate your status".

I also now understand that we need to build virtual offices so that people can work together from any location. We are in a war zone and its time we took it seriously. Thank goodness I woke up in time.
Posted by Tommie Carter at 10:49 AM No comments:

Labels: survival of the luckiest 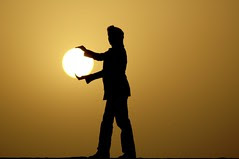 Sentimental Sunlight
Originally uploaded by HaMeD!caL
Dream things of this world and the next.
Wake up and make your dreams a reality.
Posted by Tommie Carter at 2:57 AM No comments:

Pacific Ocean Sunset
Originally uploaded by anchan62
Hold onto your dreams while life lasts, just a little longer. Never give up and do your best everyday. That's my little ray of sunshine and hope.
Posted by Tommie Carter at 1:45 AM No comments:

Contained within this site are what will seem to the reader to be a series of short stories. Such a description would be dead wrong. For the most part these are my travels into the dream scape where some believe that we exist in other realities (our spiritual presence seemingly cannot be argued since we awaken with a vision of the environment).

Many of us have constant, deep and richly filled dreams. The sad thing is that most of these experiences go undocumented. This blog attempts to close the loophole of lost dreams.

In addition to dreams we sometimes explore the fantastic and improbable stark reality of our waking world. Topics appear on this blog that only our imaginations can dream up. If you would like to be able to post your dreams, please send an email to tcarternyc(at)hotmail(dot)com.